In 2012, AiM moved into its new home, the McNairy County Visitors and Cultural Center (better known as the Latta) at 205 West Court Avenue in downtown Selmer. This local landmark building boasts a 200-seat theater, meeting spaces, art gallery and a state-of-the-art lighting and sound system. The Latta is also home to the McNairy County Chamber of Commerce and Economic Development Commission. The Visitor's center is open 8-4 with staffing provided by the Chamber while cultural events and exhibits are sponsored by Arts in McNairy on nights and weekends. 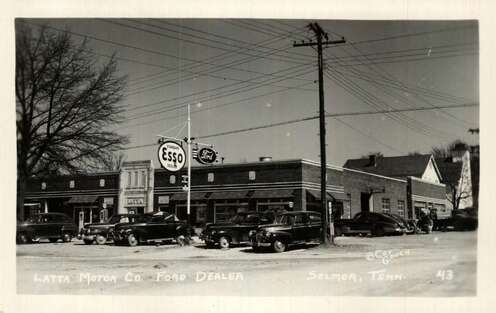 The Latta Building was constructed in the mid 1930s to serve as a local Ford Motor Company dealership. The one story brick building bore the unmistakable stamp of the period with its high quality construction and Art Deco details and finishes. It would retain its original function as a service station, auto shop, and car showroom for more than forty years. Built by Earl Latta, a well known Selmer entrepreneur, amateur musician and music enthusiast, the property was much more than just a car lot. Generations of McNairy County residents remember the Latta family's generosity and hospitality in opening their doors to the community. Almost from the beginning, the Latta building became a gathering place during the day and an entertainment venue by night.

Latta hosted regular weekend music jams in the old shop area which, almost miraculously, had perfect acoustics. Period photos show hundreds of people gathered in the Latta building enjoying an evening of music with friends and family. The regular sessions featured some of the regions best known musicians and vocalists. As one local put it, " everybody who was anybody played for Earl Latta." That included legendary fiddle players like Waldo Davis, Elvis Black and Arnold English. A house band including, Rob Richard, Tom McCormack and Paul Taylor, among others, even styled themselves the Latta Ramblers for a time. A young guitarist by the name Carl Perkins was known to frequent the Latta jams.

By the late 1960s Latta's once booming Ford dealership was in decline finally closing it's doors in 1975. The building changed hands several times finding new life as a manufacturing plant, used furniture warehouse, and even a radio and TV station. But by the early 2000s the building had seen better days. What was once the jewel of the community became an eyesore in downtown Selmer; vacant and deteriorating for several years just across the street from the county courthouse.

By 2006, Arts in McNairy was desperately searching for a place to call home. The organization had outgrown its vagabond roots and needed a dedicated space to continue and expand programming. Meetings with county government officials and McNairy County Chamber of Commerce resulted in the suggestion that the Latta property might serve as a home for the county's two leading community development organizations who had already forged a strong relationship. The Latta site, on combined Hwy 64 and Hwy 45 through the reemerging downtown commercial district in Selmer, the McNairy County seat, provided a central location, great visibility, and convenience to the courthouse and downtown parking, shopping, restaurants, and other amenities. Existing Tennessee Department of Transportation monies from an earlier abandoned McNairy County project were considered a good option for funding if a visitor's and cultural center met the grant's transportation enhancement requirements. TDOT enthusiastically approved the plan and a series of public meetings revealed positive public sentiment for proceeding on that path.

A little over five years in the planning and execution have resulted in the restoration of a magnificent historic building which is connected in local memory to the McNairy County's past cultural and community life. Fittingly, the shop area which once hosted local musicians and audiences has been converted into a spacious, state of the art, theater complete with a first rate sound and lighting package, multimedia capabilities, and comfortable seating for two hundred. The space is the home of Arts in McNairy's community theater program and regularly hosts touring arts groups, local performances and presentations, as well as the occasional cinematic feature. The Chamber also uses the space for tourism and leadership development during visitor center hours. A generous corner gallery and smaller display space/conference room hosts local and touring cultural exhibits and serve as meeting spaces for various AiM and chamber activities. McNairy County residents and visitors have free and open access to the displays, presentation, and tourist information during regular hours of operation. They are welcomed in style with ample ADA compliant restroom facilities, vending and lounge areas. Just as the Latta family might have done so many years ago, everyone is invited to stay for the many cultural events and happenings taking place during evening and weekend hours.